AudioPulse has died on me. RIP PulseAudio. I can no longer select the A2DP profile for my bluetooth headset (Sony WH-1000XM4) under Manjaro Linux. I tried everything: switching between kernels (5.15 through 5.17), the ArchLinux wiki and demon worshipping among others, but nothing helped.

“No A2DP profile” means that everything sounds as if coming out of a tin can (also known as HSP/HFP, i.e. headset/hands-free profile).

If some unresolved dependencies remain, remove them with pacman -R first.

If everything works well, the bluetooth device corresponding to your headset should have a selectable A2DP profile: 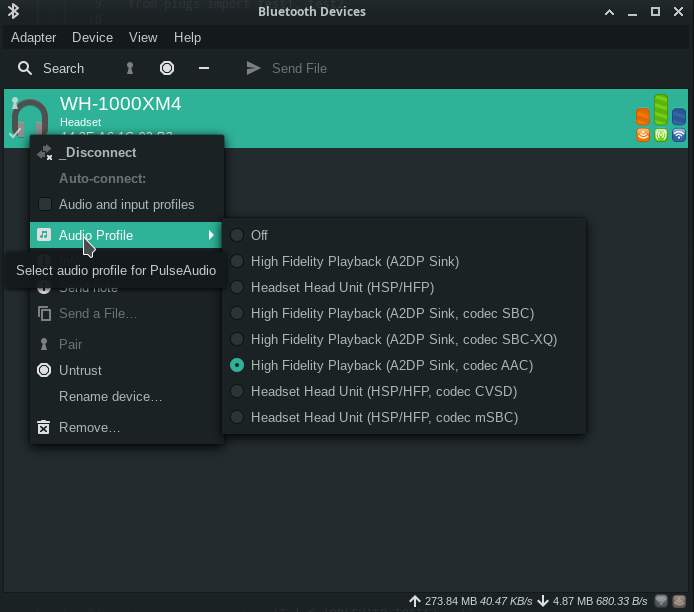 If this is not yet the case, there’s a final cleanup step that may be required:

Automatically switch to the bluetooth headset

In a previous post, we’ve seen how to automatically switch to the bluetooth headset once it’s on. That was valid for PulseAudio. For PipeWire it’s a bit different. To achieve this, edit the file /usr/share/pipewire/pipewire-pulse.conf and, under content.exec, uncomment the following line:

After this step, if restarting PipeWire is not sufficient, just reboot a last time and everything should be well. The bluetooth headset should be switched to when it is turned on.

I can never remember how to automatically connect to my bluetooth headset so here is a very short recipe. Make sure your bluetooth headphones are already paired and trusted. Then proceed according...

I spent more than an hour on this issue. I just got a Lenovo T14s and my sound card was not detected with alsa-lib 1.2.4-3 on Manjaro Linux. I was getting a “dummy output” in PulseAudio’s Volume Co...

Confession time: I hoard mech keyboards So I have this thing (call it a slight obsession) for mechanical keyboards. I’m fascinated by them. My daily driver until now was a 60% keyboard (a Filco ...

Resize and compress a PDF in Linux