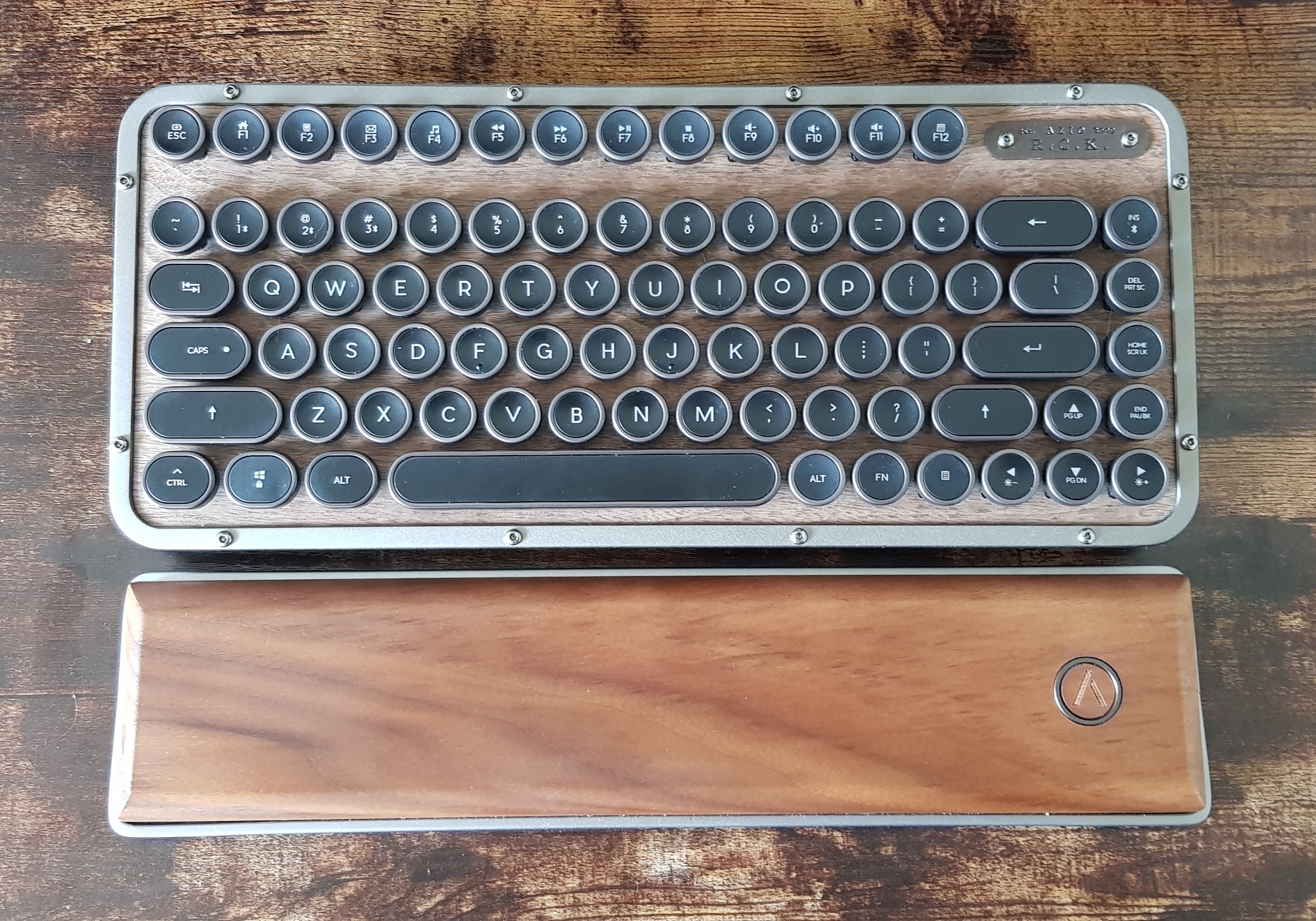 So I have this thing (call it a slight obsession) for mechanical keyboards. I’m fascinated by them. My daily driver until now was a 60% keyboard (a Filco Minila with MX Browns) but in the past I’ve used a few IBM Model Ms on a daily basis, especially my cherished “little” SSK. I also have a Unicomp with custom Tux keycaps and another Filco Minila with MX Blues, just in case the one with MX Browns breaks down

Fast forward to 2022: new apartment, new job, new desk (WFH FTW!). Out of the blue, the best thrift opportunity that I could have hoped for comes up: somebody was selling their Azio Retro Compact Keyboard in its elwood edition! Meaning exactly what I’ve been longing to get my hands on for over a year.

It’s a gorgeous-looking bluetooth keyboard with Kailh switches that emulate the feel of MX Blues. It can also work via USB and, for what it’s worth, it is also backlit if you care for that sort of thing. Without backlight, a single charge lasts for a long time. I’ve been using it daily for 2 weeks and I’m still at 60% battery. It has the ability to pair to up to three different devices via bluetooth. Which is perfect, because I can use it on my home computer, on my work laptop as well as on my Android phone.

The second problem, once I got the keyboard paired, trusted and connected, was that the numlock was enabled by default on Manjaro

That’s the way you do it

Detect and connect the keyboard

If the blueman applet doesn’t see the Azio RCK, or any other bluetooth device for that matter, you will need to launch bluetoothctl (provided by the package bluez-utils on Arch Linux and Manjaro, or simply by the bluez package on Ubuntu):

Now we instruct bluetoothctl that it should scan for devices as they become available:

At this point, the keyboard should be in pairing mode. For the Azio RCK, first choose which device to pair among the possible three by pressing Fn + 1/2/3. Then enter pairing mode by pressing and holding Fn+Ins. As the device becomes available, bluetoothctl will signal this by showing the device address (it’s like a MAC address).

Turn off the numeric lock

In case only the right part of the keyboard seems to work but it only outputs numbers, it means the numlock is on. Turn it off by installing the numlockx package and by running:

Earlier in this post I mentioned Keychron because the solution comes from somebody having experienced the same problem with their keyboards on Debian.

The solution is to write 2 in /sys/module/hid_apple/parameters/fnmode, as root:

If this solves the problem, the change can be made permanent by creating /etc/modprobe.d/hid_apple.conf with the following contents:

Yes, the Azio RCK works under Linux with a bit of tinkering

AudioPulse has died on me. RIP PulseAudio. I can no longer select the A2DP profile for my bluetooth headset (Sony WH-1000XM4) under Manjaro Linux. I tried everything: switching between kernels (5.1...

I can never remember how to automatically connect to my bluetooth headset so here is a very short recipe. Make sure your bluetooth headphones are already paired and trusted. Then proceed according...

How to detect modified files across two directories