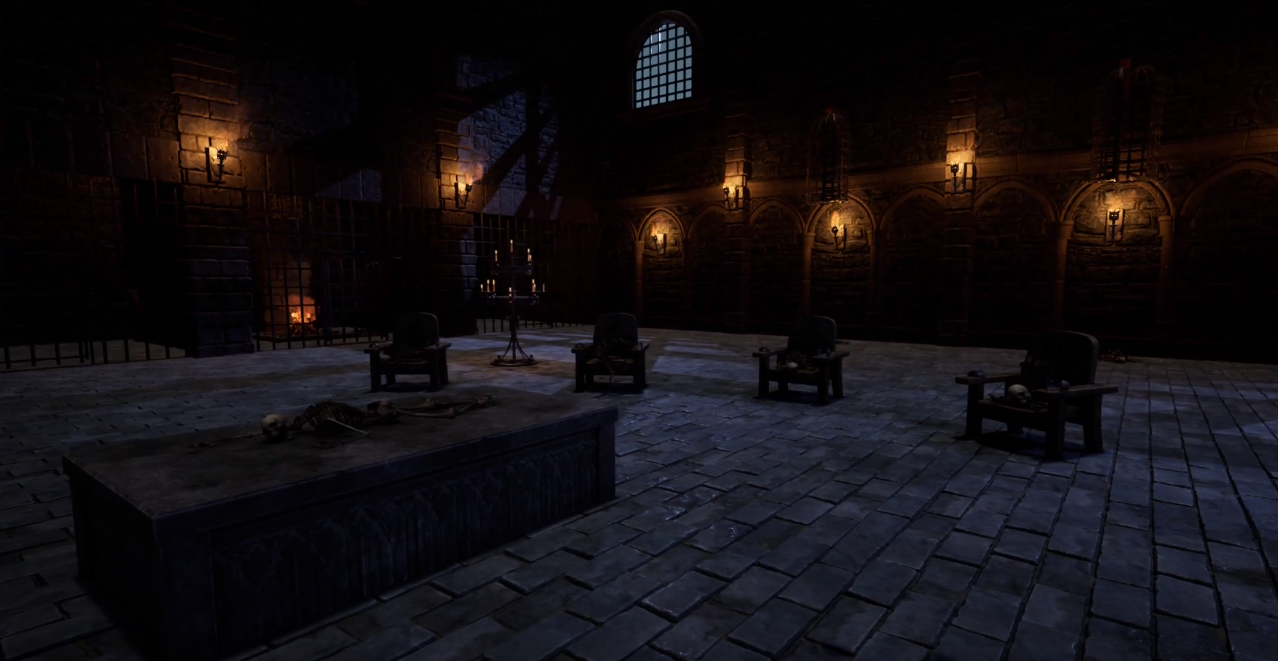 No, wait. The real reason is that, unlike Unity, UE4 runs on Linux. But none of this would matter if I wasn’t dead curious about game engines to start off, which I am.

I chose to embark on this journey with the Udemy Unreal Engine C++ Developer course by Ben Tristem and the GameDev.tv team. Of course this is just to get one’s fingers dipped. In order to have a better understanding of game development, you’d need a lot more than just a single course:

And if you ever plan on going the solo route, on top of those technical skills you’d need to create and manage your indie game dev studio, as well as to effectively market your games.

As far as I’m concerned, I have zero intention of going that way. I’m just curious about game development in general and fascinated by what can be achieved. After so much time of dissecting how video games are built, I just thought I’d take a crack at building something myself.

Despite being so powerful and versatile, it is alas very poorly documented! But since I’m dead set on using Linux and I refuse to learn Godot as my first game engine, Unreal Engine 4 is my only option. I’ll figure it out along the way, right? …right?

I went more than halfway through the Udemy course when I got my first real challenge: using what I had just learned to make an actually playable demo level. So what exactly had I learned?

The Udemy course then sends you off spiraling into the dark abyss, giving you the challenge to create an actual playable level, as polished as you want it to be. Challenge accepted!

The level is supposed to have the player solve a series of puzzles by manipulating objects in the game environment in order to escape an enclosed space. My choice of asset pack went with the Medieval Dungeon pack from the Unreal Marketplace. This resulted in creating a sadistic dungeon prison environment from which the player must free herself.

The player can exit the dungeon by placing four “magic cubes” in the appropriate locations, as well as a “magic crystal”. When all of the five items are in place, the dungeon doors open and the game is over.

Here is the Youtube link to the playable level:

Below is a simplified level design document for the dungeon prison breakout level (most of the props are not shown). The player starts in the prison cell located in the bottom right corner of the map: 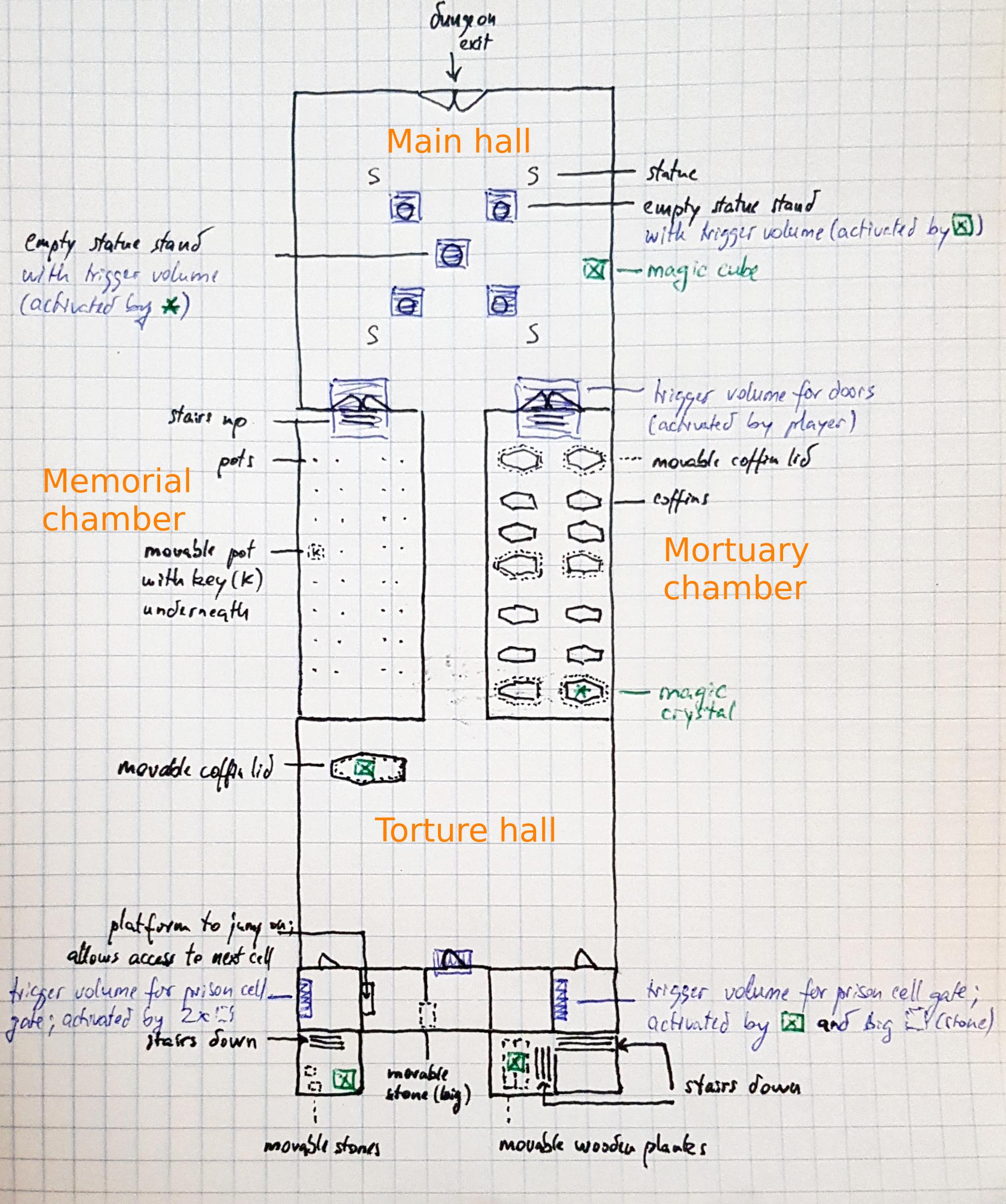 With the help of this document, I will attempt to explain how the level plays. In order to get the cubes and the crystal, the player goes through a certain number of interactions:

While building this level I came across some interesting challenges. Most of them involve blueprints, an alien visual scripting language designed to torment the souls of UE4 newbies. At times it’s frustrating as I feel like I have no idea what I’m doing

I wanted to guide the player by giving her a visual cue for objects that she can interact with. The idea is to use a custom depth stencil value and a post-processing volume. Every interactive object has its own blueprint. There are actually two distinct custom stencil values that I use, because I wanted to make the key really stand out since it is very small. I used this tutorial to get started.

I wanted to have doors open and close according to a variety of conditions and behave a certain number of ways, for example:

I achieved this by exposing many variables to the Unreal Editor and by adopting a modular class design. The base class implements basic behavior (opens and closes a door at a given angle and speed). It is extended by two derived classes that describe how certain actors are expected to trigger the conditions for controlling the door.

I created a very simple particle system following this tutorial. Its role is to emphasize that the cubes and the crystal have been placed in the proper locations. The particle system is handled by a C++ component that I attach to the static meshes that must be emphasized. In order to activate the particle system when the right conditions are met, I struggled with a few nasty crashes before I understood that setting the location of the particle system (SetRelativeLocation()) can only be done in BeginPlay(), not in the component’s constructor, since at that point the owner’s location is unknown.

Playing a sound when an item is dropped

Initially I had naively added two audio components for items that the player can interact with: one was played on grab, the other on release. However, playing a sound when the object is released is not the same as when it hits the floor. From this tutorial I learned how to make the sound play only when a hit event (collision) occurs. But this wasn’t the full answer to my problem, since every time the player moved around with an item attached to the physics handle and the item collided with something in the environment, the sound would play. I ended up exposing a C++ variable in the grab/release component to the blueprint editor in order to check which actor is currently attached to the physics handle. In the blueprint I implemented the desired behavior: if a collision is registered for an actor and if that actor is no longer attached to the physics handle of the player pawn, only then play the “drop” sound. It’s not perfect but it was an interesting exercise!

Completing my “dungeon prison breakout” level was a very interesting and challenging journey. I’ve come a long way since I enrolled in this course, but there are so many things I’m yet to discover. I leave this little project behind me with a few small regrets:

But it’s time to move on with the course. “Toon Tanks”, here I come!

Confession time: I hoard mech keyboards So I have this thing (call it a slight obsession) for mechanical keyboards. I’m fascinated by them. My daily driver until now was a 60% keyboard (a Filco ...

How to detect modified files across two directories

Suppose you have two directories old and new containing the same files, but some of them have changed in the new directory. Further suppose that source control is not used

Fix the look of KDE apps in other desktop environments