The problem with Linux and the UE4 Marketplace

The Unreal Engine itself is technically supported on Linux: while you cannot download a pre-packaged version (unless your favorite distro maintainers are really cool), you can link your GitHub account to your Epic Games account in order to gain read access to the Unreal Engine 4 repository. From there, you can clone the UE4 release that you need and compile it from source.

But figure this: your Epic Games account also gives you access to the Unreal Engine Marketplace. You can use your browser to connect, browse the marketplace and get free assets or buy non-free ones. Therein lies the problem, you see. You can only “link” them to your account. You cannot download those assets on Linux using the browser. The download button tries to open the UE4 Editor and since the Linux version does not come with the marketplace bundled, you won’t be able to download those assets.

You can build your UE4 projects on Linux. You just can’t get assets for them from the Epic Games Marketplace… on Linux.

There is a solution

And here is where Lutris comes to the rescue! Lutris is an open-source platform for playing games on Linux. Among the many games that you can download in their Windows version to install in Linux through Wine (provided that you have them in your Steam or GOG libraries), you can also download certain game store clients such as Origin or Epic Games.

Install Lutris and launch it from a Python 3.8+ environment. Alternatively, ensure the default Python version is 3.8+. This is very important, because if you use an older Python version the install will seemingly complete but the Epic Games launcher will not exist.

In Lutris, search for “epic games” and install the Epic Games Store. Once finished, check that you have your EpicGamesLauncher.exe executable in your Epic Games install path. For this example, let’s suppose you installed the Epic Games Store in ~/Programs/epic-games-store. Then make sure that ~/Programs/epic-games-store/drive_c/Program\ Files\ \(x86\)/Epic\ Games/Launcher/Portal/Binaries/Win32/EpicGamesLauncher.exe exists.

You don’t need to install the Windows version of the Unreal Engine through Wine/Lutris in order to download assets, you just need a UE4 project. And what better way to get your assets imported directly into your Linux projects than to symlink your Unreal Projects directory to the virtual Wine file system?

Here is how to do it. Suppose you store your Linux UE4 projects in ~/Documents/Unreal Projects. You just need to create a link from your hypothetical Windows My Documents to your actual Unreal Projects folder in Linux:

(Don’t forget to replace YOUR_USERNAME with your user name and to backslash-escape spaces in path names.)

Completely close the Epic Games Store and Lutris and launch them again. Connect to your Epic Games account, then go to Unreal Engine > Library. Your downloadable assets are in your Vault (see below): 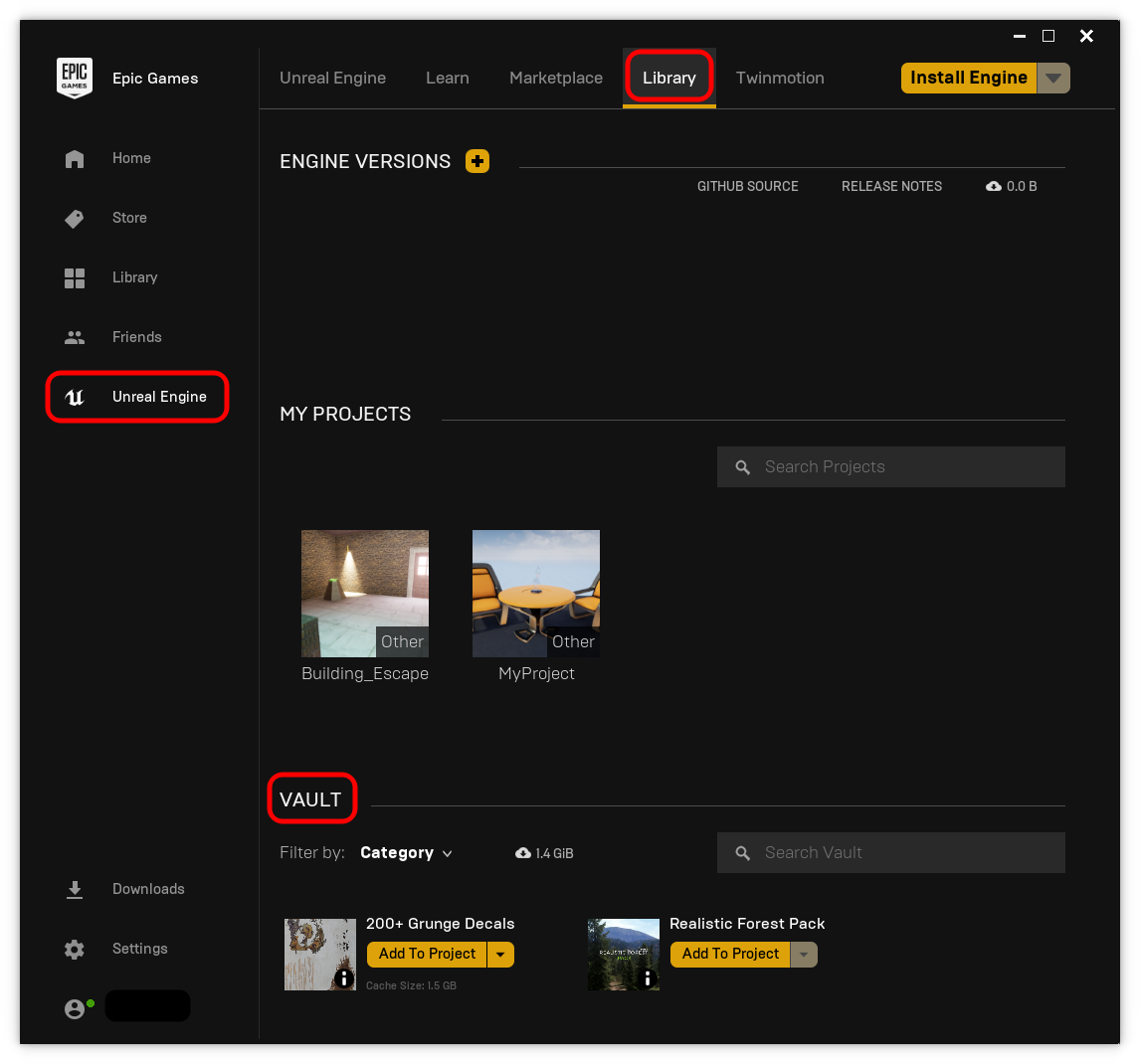 Now select an asset from the Vault and click “Add to project”. A new window will open asking you to which project to add the asset, but your projects might not be visible. Select the “Show all projects” checkbox, then select your project and from the drop-down list select the version of the engine for that particular project: 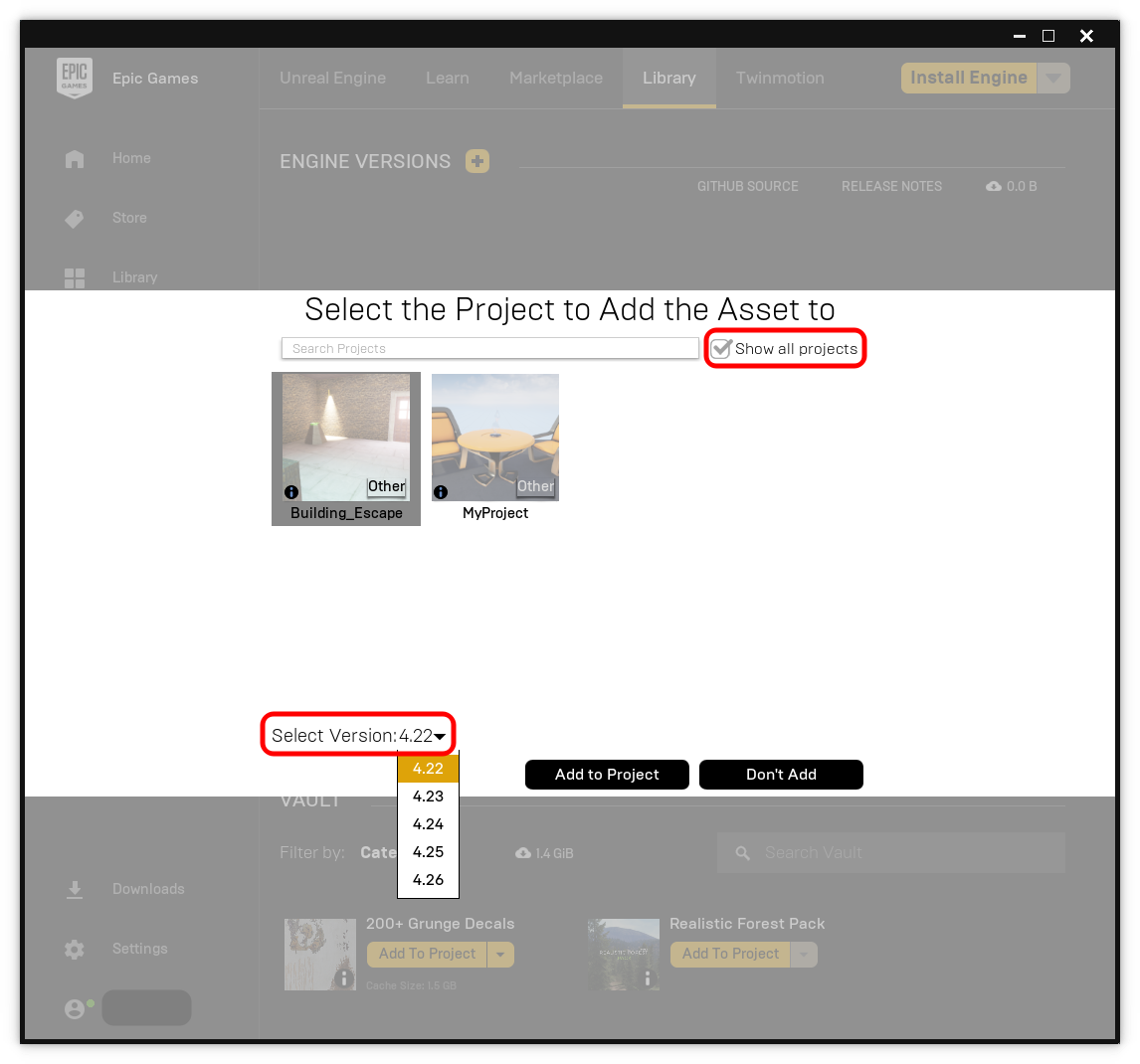 Now you’re all set! The asset pack is downloaded to the Content/ folder of your UE4 project.

How to manually modify a .deb package

[I originally published this post on Blogspot.] Every now and then you might need to tweak a .deb package for testing purposes. For instance you just want to change the behavior of the postinst sc...

How to split files in Linux from the command line

[I originally published this post on Blogspot.] It can be useful to split large files, or even smaller files and ensure all the resulting volumes have the same size. For this we will be using spli...

Definitely not the definitive guide to Mercurial merge