Remember from our last post that threads are the smallest set of instructions that can be managed by the scheduler. Unlike processes, multiple threads of a program share the same address space and are capable of accessing the same data.

Each thread has its own program counter and registers. The program counter is a special register that tracks the instruction that is currently being executed (or the next instruction to be executed). When the scheduler switches between two threads running on a single CPU, a context switch takes place in which the state of the registers of the thread being switched from are stored and the registers of the thread being switched to are restored.

Here’s an inspirational quote from OSTEP (Remzi H. Arpaci-Dusseau and Andrea C. Arpaci-Dusseau, chapter 26, Concurrency and threads) to get us started:

Computers are hard enough to understand without concurrency. Unfortunately, with concurrency, it simply gets worse. Much worse.

In Python, we can create and manage threads using the threading module. In the following example we create and start two threads that run the method my_task() (which essentially does nothing of interest beside sleep for a given amount of time):

In main(), we create the threads, then actually start() them, and finally join() them. Joining a thread means to wait until it terminates. Unsurprisingly, here is the output of the above program:

Why do we need synchronization?

But everything works fine. Why do we need synchronization? Glad you’ve asked! Concurrency can be tricky. Remember that we have discussed some common concurrency pitfalls in Part 1 of this series. It might have all seemed a bit abstract, so let us now look at an example where things don’t go according to plan. Suppose we have two threads and each one increments a global counter:

The result is not what we expect. Even worse, it is inconsistent from run to run:

Let us understand what just happened: 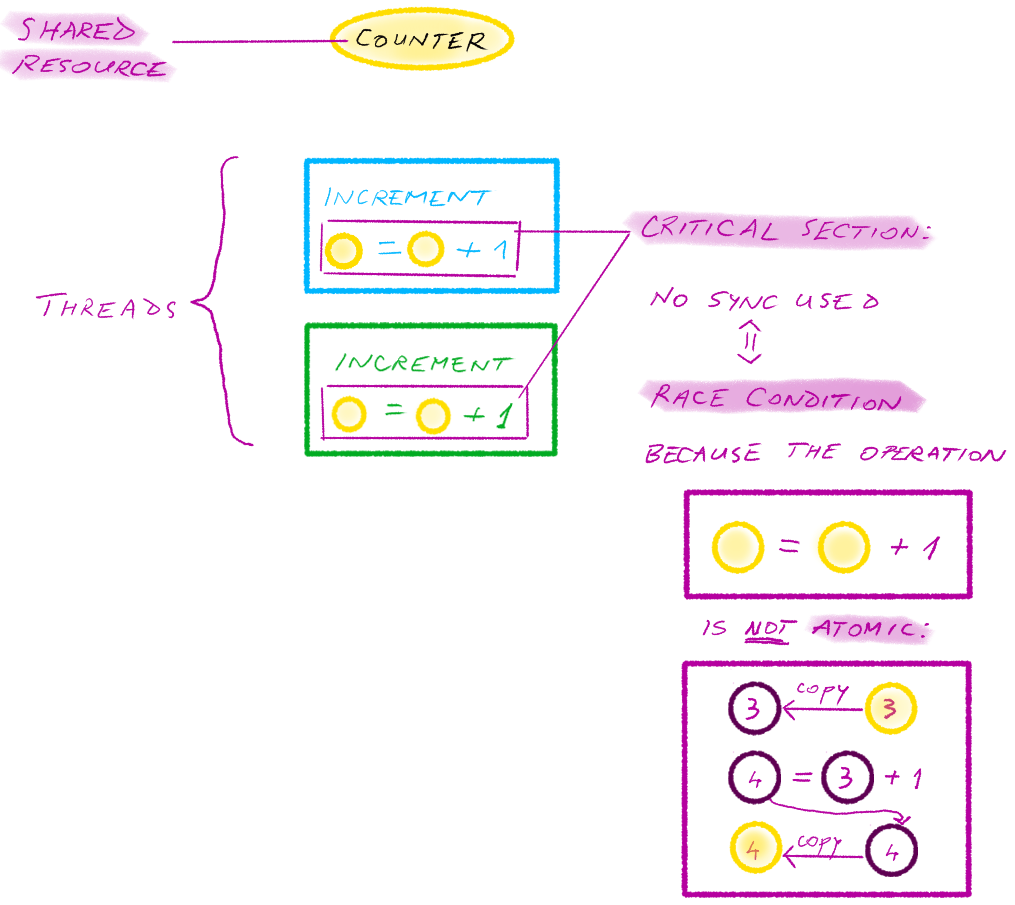 A critical section refers to code that can result in a race condition when executed by multiple threads, because a a shared resource is involved.

In our example, both threads attempt to modify the global counter variable by incrementing it. In other words, both threads access a shared resource in a critical section in write mode, without using thread synchronization.

In our example, both threads attempt to increment the global counter; as we’ve seen, not all increments are successful.

A series of actions is atomic if the actions are “all or nothing”, meaning they either all occur, or none occur. (You might be familiar with database transactions: by definition, they are atomic.)

Now that we’ve seen why thread synchronization is necessary, we cannot simply jump right in without first mentioning the dreaded Python GIL, short for the Global Interpreter Lock.

The image below summarizes the relationship between language specification and implementation: 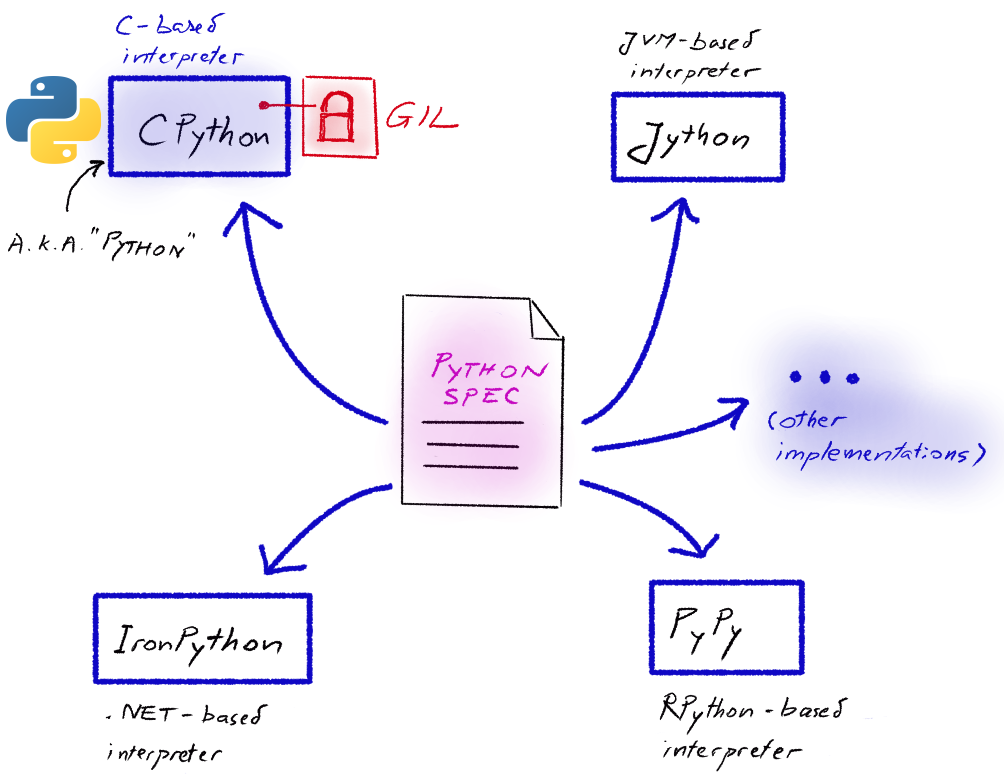 CPython and the GIL

When we run a Python script using the python (i.e. CPython) interpreter, the source code is first compiled into byte code, a low-level platform-independent representation that is executed by the Python virtual machine. You have probably already seen the .pyc files in the __pycache__ directory – that is byte code. The Python virtual machine is not a separate component, but rather a loop running inside the Python interpreter. It simply executes the generated byte code line by line.

The GIL is a mechanism that limits Python (remember we’re talking about the CPython interpreter) to execute only one thread at a time. Below you can see a GIL visualisation showing the main thread and 4 additional threads running on a single CPU; the green blocks represent the time when threads are executing:

The reason behind the GIL

Why would Python designers restrict the CPython interpreter to only be able to execute a single thread at a time? When CPython was being developed, its garbage collector was designed to use reference counting. This means that an object is released from memory when its reference count reaches zero.

If several threads are running, race conditions may modify the reference count if it is not protected by a simple synchronization mechanism called “lock” (that we will be looking into in the next post). The solution was to impose a global lock providing exclusive access to the Python interpreter. This way, the Python interpreter executes byte code using the GIL, which in turn means that only one thread is active at any given time. The advantage is that reference counting becomes thread-safe. The drawback is that the remaining threads from the byte code must wait for the GIL to become available.

You can also check out the article over at RealPython for more context.

Effects of the GIL

The dreaded effect of the Python GIL that we’ve hinted at earlier is that, no matter how many CPUs there are, since only a single thread can run at a time, the extra CPU cores remain unused. In other words, I/O-bound problems can be sped up through multithreading, albeit the threads run one at a time, in interleaved fashion. However, because the GIL prevents threads from running in parallel, no speed-up is possible unfortunately for CPU-bound problems (which, as we’ve seen in Part 1, require parallel execution).

Do not despair though: multiple CPUs can be used in Python if we create processes instead of threads. Since every process comes with its own interpreter, the GIL issue is effectively side-stepped. We will be looking into processes in a later article in this series.

The next post in this series will present thread synchronization primitives and show how they can be used in Python. In subsequent posts we will also be discussing processes, asynchronous programming, as well as parallel algorithm design and evaluation.

This is a multi-part post: Part 1 (this article) establishes terminology (tasks, threads and processes and how they relate to concurrency and parallelism) and gives an overview of challenges fac...

Resize and compress a PDF in Linux