Here we discuss how to rotate a number to the left by k positions, using bit precision. (In a previous post we’ve seen the same problem, but the rotation involved byte precision.)

Let us see an example to better visualize the rotation to the left. Suppose we want to rotate the number 100 to the left by 3 positions. As shown below, when using bit precision, we expect to obtain 38: 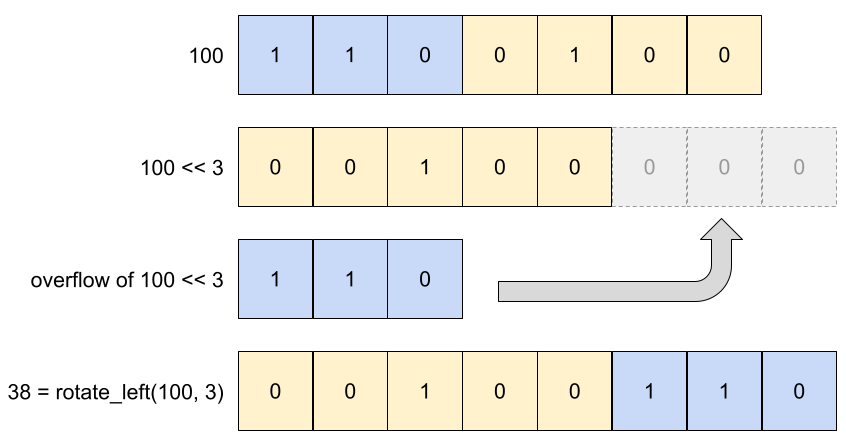 Since we’re using bit precision, the actual overflow when 100 is left-shifted by 3 positions is 110 (i.e. decimal 6).

Here are the steps for solving this problem:

We can now implement rotation to the left using bit precision:

Here are some examples of left rotation on bit precision in action:

Want to see more bitwise logic? There’s a whole repository on my GitHub on bit fiddling.

Given an integer, suppose we can flip exactly one of its bits from 0 to 1. We need to determine the longest sequence of 1s that can be obtained. Let us first see some examples: For number 183 (...

Bitwise nuggets: convert an integer to a binary string

When we want to display an int as a binary string, we need a utility function that builds the string representation of the integer. We do this from the least significant bit (LSB) up to the most si...