Sometimes you may want to impose a timeout on a Python function. Why would you want to do such a thing? Let’s say you’re computing something but you know there are some hopeless scenarios where the computation just takes too long, and you’d be OK to just skip them and go on with the rest of the workflow.

For an illustration, the figure below shows several tasks. Those that take longer than the specified timeout should be aborted (orange) and the remaining tasks that take a reasonable amount of time should be executed normally (green). 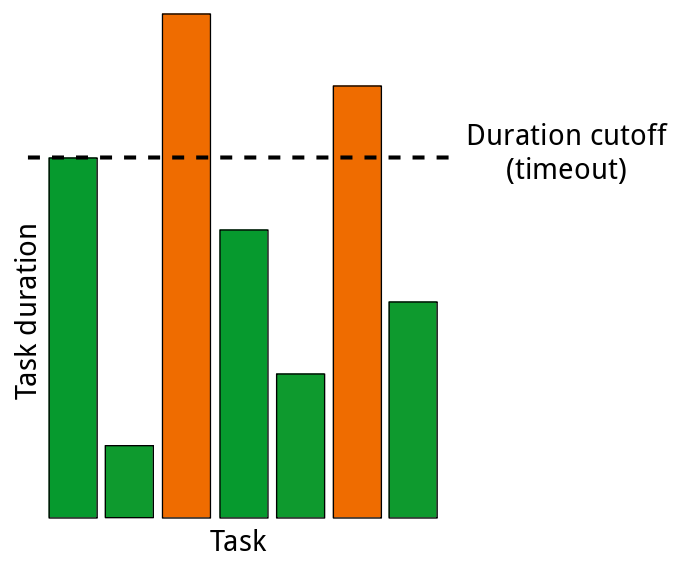 There are several ways in which setting a timeout on a function may be achieved such that the execution continues past the timed-out method. We will be examining two solutions here:

Signals are a form of inter-process communication that only applies to POSIX-compliant operating systems. Note that Microsoft Windows is not POSIX-compliant, so this solution cannot be used when running Python on Windows.

Signals can be regarded as software interrupts sent from the kernel to a process in order to inform it that a special event took place. The process receiving the signal can choose to handle it in a specific way (if the program was written with this intention, that is). Otherwise, signals are handled in a default manner specified by the default signal handlers. For example, when you press Ctrl + C in your Linux terminal to stop a running program, you are in fact sending it the SIGINT signal. The default handler for SIGINT is to stop process execution.

Check out this article for more information on handling UNIX signals in Python.

Using signals to set a timeout

Suppose we have a method do_stuff() that can sometimes be very time-consuming. We’ll be keeping this very simple:

Let’s say we only want to run do_stuff() to completion if it finishes in less than 6 seconds. With the signal module, this can be achieved if we set a timer (an “alarm”) for 6 seconds just before calling do_stuff(). If the timer runs out before the function completes, SIGALRM is sent to the process. We will therefore be using signal.alarm(6) to set a timer for 6 seconds before calling do_stuff(). Note that the argument to signal.alarm() must be an integer. Let’s check what happens:

Here is the output:

What happened? Well, the timer was set to 6 seconds and it finally ran out, one second before the second call to do_stuff() would have normally finished. The process exits with code 142 (SIGALRM). Let us change the main() function to reset the alarm after each call to do_stuff():

Note that signal.alarm(delay) arms a timer for delay seconds. This means that if do_stuff() takes exactly delay seconds to complete, SIGALRM gets transmitted nonetheless.

Next, we will define a handler for SIGALRM. A handler is a function that “handles a signal” in the specific way we instruct it to behave. User-defined handlers are used to override the default signal handlers. For example, suppose you want your program to ask the user to confirm her desire to quit the program when she presses Ctrl + C in the terminal. In this case you’d need a SIGINT handler that only exits upon confirmation. Note that signal handlers must respect a fixed prototype. To quote from the Python documentation:

The handler is called with two arguments: the signal number and the current stack frame (…).

Even if a a signal handler does not use these two arguments, they must be present in the handler’s prototype (and no other arguments may be passed). Here is our simple handler; it just throws a TimeoutError:

This handler only makes sense if it is registered for SIGALRM. Registering handle_timeout() for SIGALRM should be added to the main() function of the script above. Here is how to do it:

By re-running our script, we can see that it now stops with a TimeoutError:

This is great, we have an exception now – and exceptions are something we can deal with in Python.

Making execution continue past the timeout

Next, let’s handle the TimeoutError. We will change our script such that it loops indefinitely and at each iteration through the loop it attempts to do_stuff() for a random number of seconds between 1 and 10. If do_stuff() is called with 6 seconds or more, then SIGALRM is sent and handled by raising a TimeoutError. We catch that TimeoutError and continue execution until hitting Ctrl + C. As an added bonus, we also include a handler for SIGINT (Ctrl + C).

So how does the execution continue past the first timeout? As we’ve seen above, we installed a handler for SIGALRM (lines 12-13 and 22) that raises a TimeoutError. Exception handling is performed in the main() function inside an infinite loop (lines 26-36). If do_stuff() succeeds, the script displays a message informing the user for how long the function ran (lines 35-36). If the TimeoutError is caught, it is simply displayed and the script continues.

Well, it works but there are two problems with this solution:

In this post we’ve seen a simple solution involving UNIX signals that may be used in some situations to set a timeout on a Python function. However, this solution is less than ideal for two reasons: the operating system must be POSIX-compliant and it can only work between atomic operations. In the next post we will examine a better solution using the multiprocessing module.

The problem Sometimes you may want to impose a timeout on a Python function. Why would you want to do such a thing? Let’s say you’re computing something but you know there are some hopeless scenar...

How to split files in Linux from the command line