The first time I had to explain to students why a C union may sometimes come in handy, I came up with this example. As my students had only been exposed to C for about 15 hours, I needed to refrain from talking about standard use cases involving low-level operations where unions are very useful.

Suppose we have 2D segments defined by their endpoints, like this: 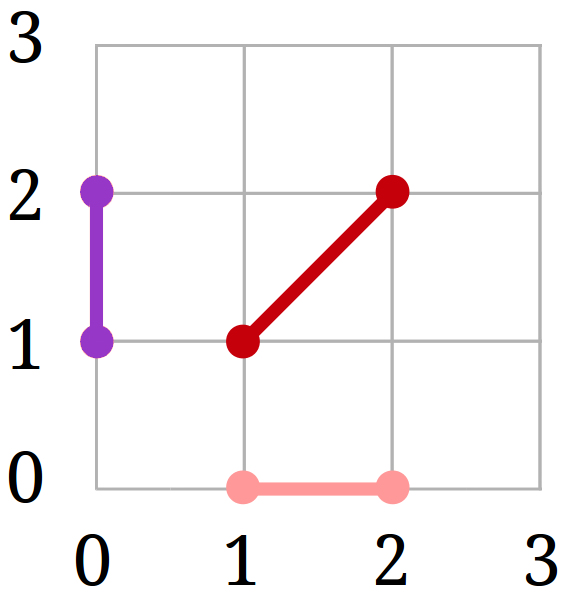 For example, in the figure at the right we have a segment with endpoints (1, 1) and (2, 2). (It will be referred to as “the red segment” later on.) Its projections on the X and Y axes will be:

However, there are two special edge cases: 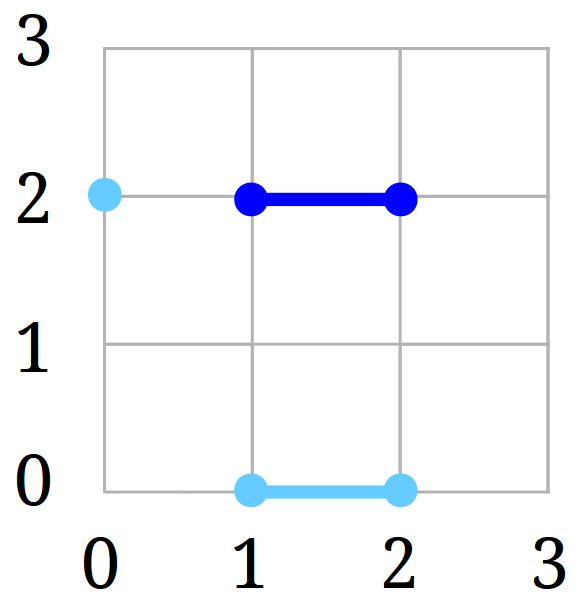 Therefore, the result of either projection operation in terms of the data structures defined in the code snippet above can be either a Segment or a Point2D. And, as it so happens, one cannot have a function return different result types in a strongly typed language such as C.

Enter unions. They allow you to store different data types in the same memory space, but not at the same time. Like a struct, a union has members, but only one of them can store information at any given time. Why is this interesting, you ask? Here’s why: a union has the size of its largest member. This is very important when aiming to reduce the memory footprint of an application.

Here is a first take for a union that stores the result of a segment projection operation:

That’s great, but how do we know in which member of the union our valuable information is being stored? We need some sort of hint to figure out if a given _Projection variable contains a segment or a point. This hint commonly goes by the name of flag and requires a structure of its own to live in. We cannot simply add the flag to the _Projection union directly since this would mean that such a union can only store one of three possible values: a segment, a point or a flag. For this reason we wrap the whole _Projection union into a struct, as follows:

(Don’t forget to #include <stdbool.h> for the bool type.)

So how does this thing work? We could write something like the following:

I think you will agree that the access to proj is both tiring and ugly. We can avoid it if we nest the union directly inside the struct, without giving it a name. This is called an anonymous union. The catch is that anonymous unions are only available starting with C11. So let’s rewrite the data structure:

It is now much easier to access, say, the point member:

Great, so how do we use this? Let’s look at one of the two projection functions, for instance the one that projects a given segment on the vertical (Y) axis. We could write it as follows:

Let’s test the vertical_projection() function on the red and blue segments above.

The first thing to do is to define two general functions that will test whether a Projection respectively contains the specified Segment or Point2D. These functions will involve assertions, so we will need to #include <assert.h>. If an assertion fails, the program execution is aborted.

These two general functions may now be used to test the specific examples we’ve seen above.

The red segment must have the segment with endpoints (0, 1) and (0, 2) as its projection on the vertical axis (in purple in the figure):

The blue segment must have the point with coordinates (0, 2) as its projection on the vertical axis:

XOR swap is a kind of in-place swap that only uses XOR operations. No temporary variable nor addition/subtraction operation is needed. However, it only works for integers. Reminder: XOR (short for...

Given an integer, suppose we can flip exactly one of its bits from 0 to 1. We need to determine the longest sequence of 1s that can be obtained. Let us first see some examples: For number 183 (...

Implementing a vector in C

Suppose we need a generic vector data structure in C, where by generic we mean it can handle any type of data. A vector uses an underlying array, therefore it supports index-based access to its ele...

Summing a column with awk

Implementing a vector in C